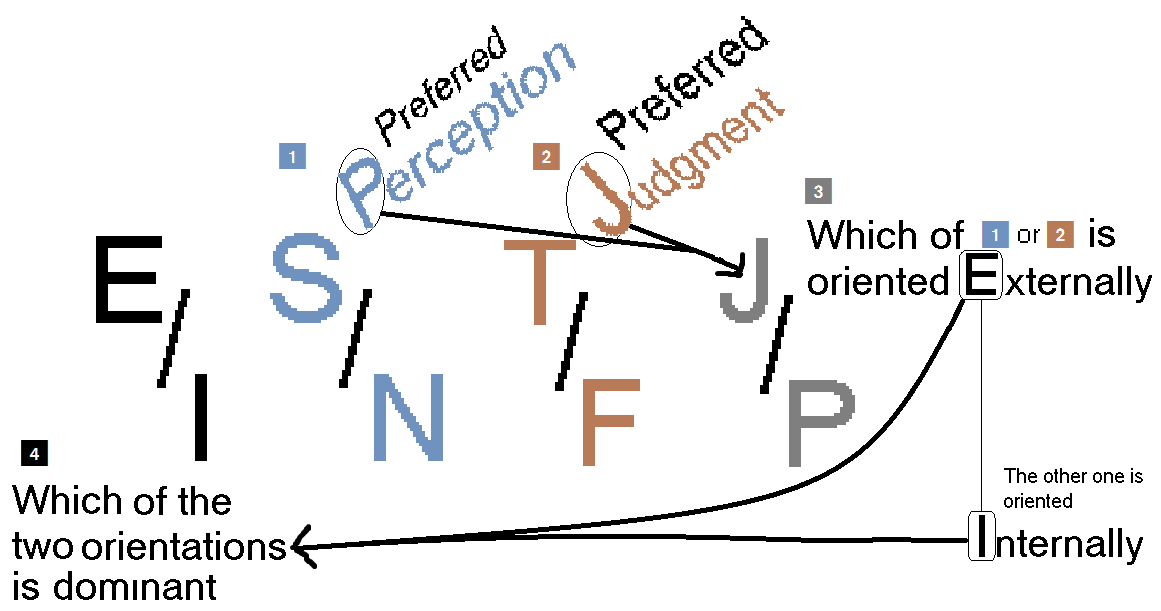 1) Type is formed from:
•a dominant orientation (introversion/extraversion; yielding the first letter; I or E) and
•two functions; one dominant and the other, "auxiliary".

Of these two (out of four) function-attitudes, one will be "dominant", which makes it the ego's main perspective. Another will be "auxiliary". These are the "preferred" functions.

2) The two preferred functions are the two middle letters of the four-letter type code.

3) Of the two functions, one is "perception" or "information" gathering (S, N), and the other is "judging" or for rational conclusion or decision-making (T, F).

•Sensing (S) and iNtuition (N) are the information-gathering ("Perception") functions.

—Sensing deals with experience of what's tangible (often called "concrete"), in which we consciously register reality as picked up by the senses as significant in its own right (rather than taking it for granted or reading other meanings into it).
—iNtuition deals with implications drawn from reality, or inferring what's intangible or conceptual, such as "larger contexts", "ideas" of things, and symbols (often called "abstract").

•Thinking (T) and Feeling (F) are the decision-making ("Judging") functions.

—Thinking deals in evaluation based on simply how things work, which is also known as “technical” or "mechanical", and more popularly, “logic”, which can be expressed in terms of what's “true” or “false” (regardless of emotional "affect" on us). Our reactions to things will tell us simply about the object itself.
—Feeling evaluates or sorts out our personal feelings or emotions (though it's NOT the actual emotions themselves), which are determined by the affect of things on human souls. Our reactions will tell us about the state of our souls. Thus it will often deal in values and ethics which have more of a "humane" dimension; often determining "good/bad".

6) Because of this, their dominant function takes on the dominant orientation

(called “attitude”, while the auxiliary bears the opposite one).

7) The functions thus end up becoming oriented internally or externally themselves, or designated "introverted" or "extraverted".

8) The last letter, J or P, indicates which of the two preferred functions (denoted by its “Judgment” or “Perception” class) is "extraverted" (that is, externally oriented),

which Myers determined would be significant in personal interaction.

There are thus sixteen possible combinations of function attitudes using these measures. This is by any combination of: E/I + S/N + T/F + J/P